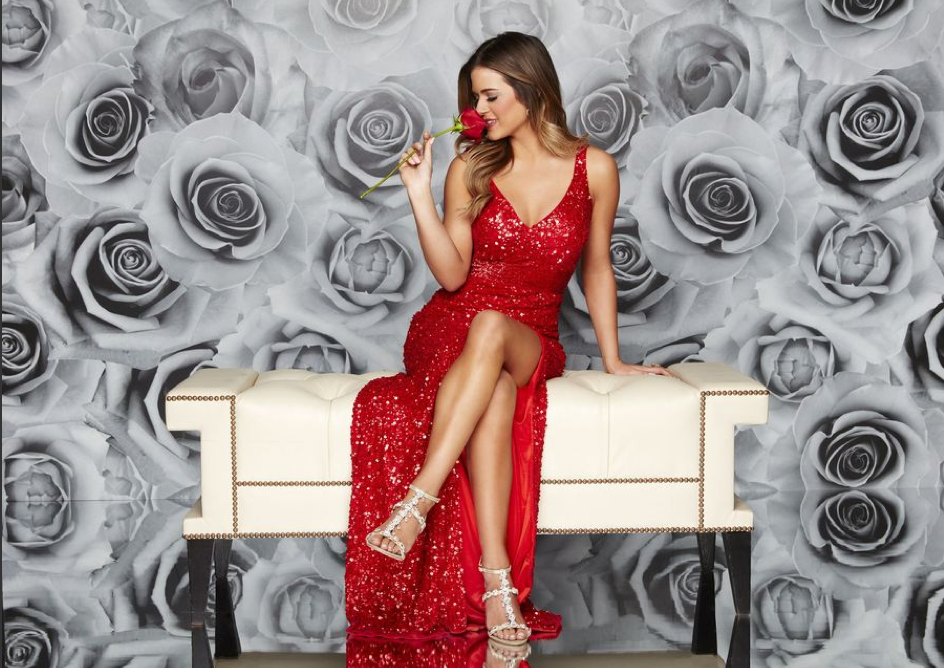 A look back on Bachelorette JoJo

Bachelorette JoJo is back and eager to find love! Her hair is highlighted, her neckline is plunging and her denim panties are on standby, ready to make an appearance this season. Here’s to the journey!

For those of you who may need a little refresher course on the wonder that is JoJo, I’ve compiled a few paragraphs from last season’s recaps to help you remember why Mike Fleiss rallied around this woman (and her mother) enough to convince a group of ABC showrunners that JoJo Fletcher would be the obviously choice to reign as the bachelorette for season 12.

JoJo had the unfortunate task of wearing a rubber unicorn mask on her head as her wacky limo exit bit. She apologizes for the lame attempt to be memorable. Ben got the point in the end and quickly forgave her for that moment of insanity when she played a modified version of Head’s Up in their alone time. She’s a house flipper from Dallas. And I like her. Magical unicorns and all. Status: Rose

And then there was JoJo and Becca. Heaven help them. I think they cheated to see which state the others picked up. Unfortunately, after puzzling out where Chicago was (bless them), they turned Indiana 45-degrees and plopped it somewhere in the general vicinity of Pennsylvania. I understand the the “I” states can be confusing (not really) just like the group of square states in the middle (come on) but as Ben said, “It’s not like I’m asking them to put Indonesia on a global map.”

It would be rude of me to not include this link to help anyone who may find themselves in Becca and JoJo’s situation. Take a break from Facebook today and try it out!

Episode 3 — The Mansion Struggle is Real

“I’m the reason everyone is here. I’m responsible for the feelings and emotions in this house.”
— Ben Higgins

This will be the death of him. I truly believe that. He is in for a drama-filled ride. Bless his Peter Brady-beating heart.

I don’t know if we’ve ever seen this much crying so early in the season. Jubilee wept (in front of JoJo) assuming that she isn’t Ben’s type. Caila bawled (in front of JoJo) admitting that she is overwhelmed by the reality that Ben is going to date other people. JoJo whimpered, wondering how she became the house psychiatrist. The tall blonde who isn’t the flight attendant howled when a soccer ball struck her in the boob, as the Kindergarten Teacher, ironically, mewled at the thought of balls flying toward her face.

Episode 4 — JoJo Gets a One-On-One

Ben retorts with a solid question: Do you think you’re ready for another relationship?

JoJo says what anyone would in her position — she wouldn’t be here if she didn’t think she was ready. There is free booze, a killer wardrobe sponsored by some boutique in Dallas and a couple of stamps in her passport should she go far in this journey. So yeah, she’s ready. Ben takes her outside to reenact Titanic’s iconic “king of the world” moment as fireworks blast in the distance. He nuzzles into her hair (sign of affection) and they make out.

Ben makes his way back to the other ladies and tries to form a gentlemanly sentence about Jubilee’s departure. JoJo swoops him up before he can even begin to say, “It’s not her, it’s me.” She makes it all better by sticking her tongue down his throat. Then he gives Olivia the date rose. I did not see that coming. Neither did Joje.

The group date girls slip into their lace-themed bikinis, denim panties and silky robes that are doubling as swimsuit cover-ups. Ben tricks them into thinking they are going to chill on a boat and drink rum all day long. Untrue. They are actually going to swim with , , , PIGS! It’s easy, really. All you have to do is dangle a hot dog in front of them and they will swim up and eat it out of your hand! If you want them to go away, simply cross your arms over your chest.

Much like the Super Bowl, this entire idea was a hot mess. It was a Cinemax version of Lord of the Flies. Pigs were jumping onto scantily clad women even though their arms were in the official submissive pig position. Several were emotionally scarred and will probably never feel the same about eating bacon again. Even JoJo was attacked for wielding the bucket of hot dogs. At first I thought the pigs were crazy because random tourists ventured out to Pig Island to feed them remnants of their fallen brothers and sisters. I guess that’s why Ben shouted on more than one occasion, “These are CHICKEN hot dogs.”

After explaining to her that they are in an entirely different state than Indiana, Ben geeks entering Wrigley Field. The Cubs are his favorite sports team. They slip into the obligatory baseball jerseys. JoJo has “Mrs. Higgins” on the back of hers. That was highly presumptuous. Is the ABC Intern trying to tell us something?

Ben admits that he’s falling for JoJo, but he just needs her to not hold back. He wants to build on what they have. She admits that she’s trying, but it’s a little hard when there are other women in the equation. She perks up when he says, “I think I question to what extent your feelings are there.”

JoJo backpedals slightly. She tells the story of how she has always given 150% (read: 100%) every time in relationships, yet she always gets hurt. Ben assures her that he understands what it means to be scared. He’s super excited the other feelings are there though. And he’s thankful that JoJo can use adjectives to describe them. In short, this feelings talk is the opposite of Caila’s. In case Ben had any doubts, JoJo leans in for a kiss and grabs his butt in center field.

JoJo walks into the door of the front 40. Her brothers simply attack her with kisses and hugs and more kisses. Ben and I are thoroughly confused. Clearly they are doing this on purpose. Mama escorts him through the veranda, the downstairs library, the terrarium, the billiards room and the conservatory to the small dining room. The silver is polished, the Waterford is glistening and the conversation is…unfortunate.

The brothers later double team Ben, peppering him with concerns. They don’t think Ben has the same feelings for JoJo as she has for him. They think he has a poker face on because there are three other girls who he’s courting at the same time. One thinks that Ben is playing JoJo because they’ve only been out on two dates. How can he be emotionally invested?

This is the point when Mama starts to drink. Out of the champagne bottle. I love this woman.

Ben admits that this date with JoJo is going to be tough since he just left Lauren in the bed with a plate of pineapples and a hot mug of java. All of this confusion leaves his head once he spies JoJo running after him, boobs bouncing, and launching into an aggressive jump and straddle (trademark pending). Her denim panties are the denim pantiest in all the land. They hop on a helicopter and fly over Jurassic World before landing at a waterfall. JoJo’s bathing suit is from the Victoria Secret yarn collection. Her bottoms were non-existent. I’m quite certain the entire thing disintegrated when she jumped into the water with Ben.

Later they hop onto a rock to discuss how saying “I love you” is a very scary thing. At first I was distracted that JoJo was going to get a yeast infection since she’s basically sitting on a moist boulder with nothing but a piece of yard up her crack, but then she told Ben she loved him and I started paying attention to dialog. Once again, Ben said it right back. JoJo whispers, “Are you allowed to say that?”

JoJo chooses a LBD for her time with Ben, but her chest is so dominate that her side boob has to be blurred. The Black Modesty Box is sooooooo last season. JoJo kisses Ben when he arrives and begins the night by listing off her anxieties one-by-one. She’s nervous, she’s confused, she’s sad, she’s worried and the fact that he’s struggling makes her want to drink Pepto from the bottle.

Ben wants Joje to know that he cares about her. His feelings are deep. She receives this adoration as a sign that she’s the one. When she begins rubbing her fingers through his hair, Ben pulls back and tells her that there is a struggle. And the struggle is real. Like Lauren, he can’t technically find anything wrong with her. Sure she has a stalkerish ex-boyfriend and two brothers that will probably be reasons he will be in Witness Protection soon, not to mention the fact that there’s no way he’s moving to Dallas, but that’s neither here nor there.

Who’s ready for tonight! Get excited, people! The Bachelorette JoJo season is here!

A look back on Bachelorette JoJo – wRecapture

Thanks for the warm up!

i got minnesota and wisconsin switched. dadgummit!

can’t wait to watch the madness. 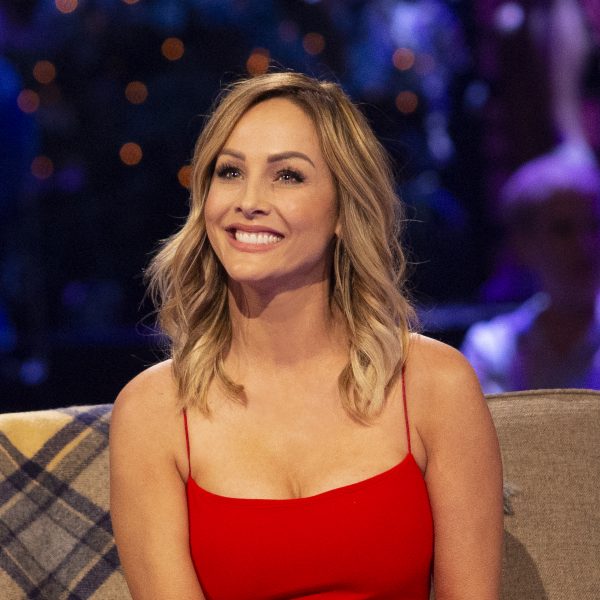 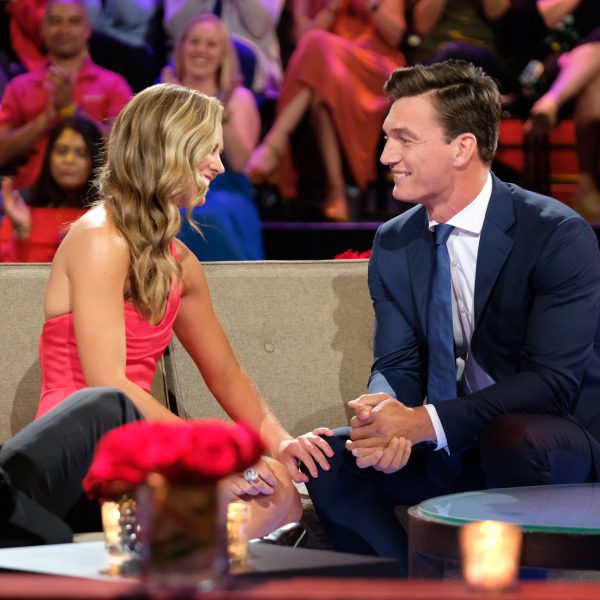 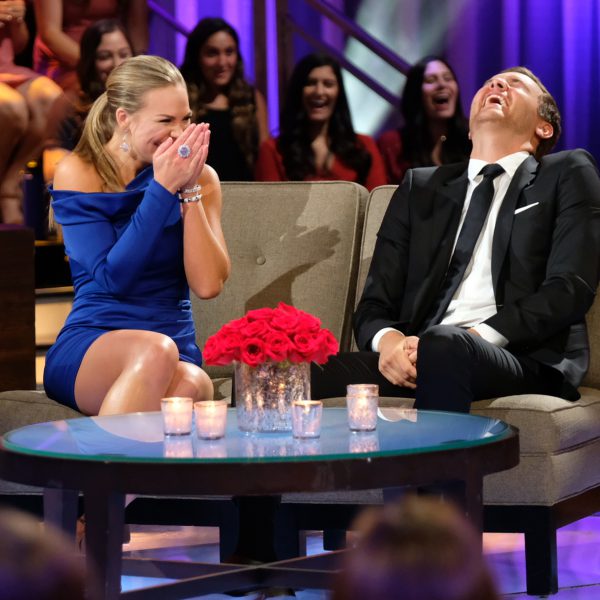