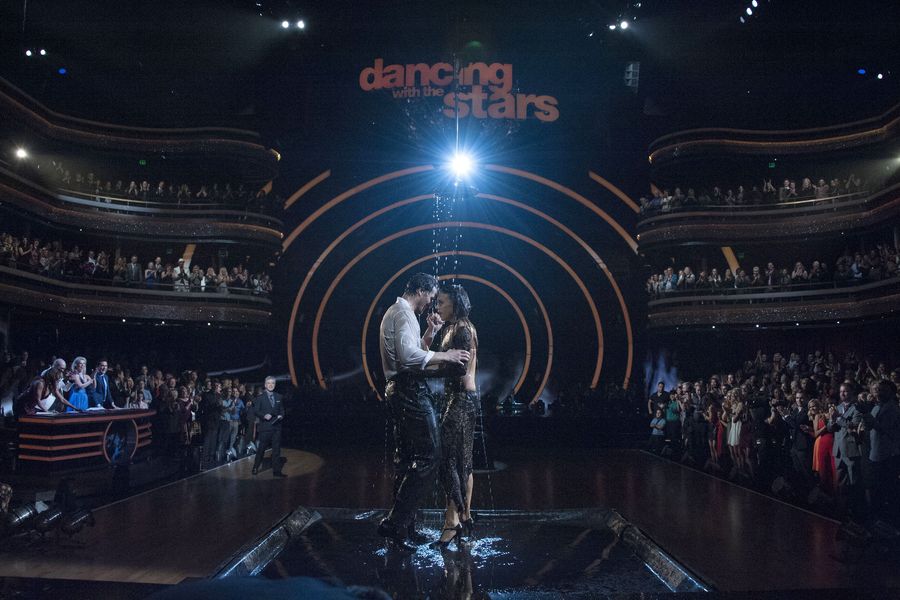 There were sweaty bodies everywhere. Ladies flipped extravagant hair extensions with the greatest of ease while trying not to pop out of skimpy outfits. A disco ball piñata hung off to the side and of course, Mr. Worldwide himself gyrated next to a guy named Lunch Money Lewis. Gird your loins, dear readers. It’s Latin night on Dancing with the Stars!

Ryan and Cheryl
Salsa
“La Negra Tiene Tumbao” by Celia Cruz
Ryan thinks the salsa is very fast and very confusing which explains why he looks like a complete dork while dancing. I will give him the Gatorade yellow shirt with matching piping down his starchy white pair of pants, but bless his heart, the dude swims in Speedos for a living. Shouldn’t he have a little more swagger? Cheryl choreographs a shirt rip, which is nice, but that is soon followed by a pant rip revealing normal shorts and a pair of knee pads. What the what? Once the black light is introduced, all was lost on me. To quote Carrie Ann, “It was not that great” even though Pitbull shouted, “I GIVE THEM AN EIGHT” from his judge’s chair during the feedback portion of the night.
SCORE: 30

Terra and Sasha
Paso Doble
“Don’t Let Me Be Misunderstood” by Santa Esmeralda
Sasha wants Terra to bring the heat and in order to get any sort of rise out of her, he has to make her mad. It sort of works in rehearsal, but once Terra spins onto the dance floor in her sparkly purple costume, her face looks more bored than sultry. Sasha’s ruffled sleeves are epic, as well as the fact that he dances the second half of the number on his knees. Terra turns up the volume during that portion. Perhaps it was because she was the same height as Sasha and she felt power or a connection when they are face-to-face? Maybe. Julianne said it best, “This dance wasn’t your best.” Yet she still scored the same as Ryan’s best. Bless him again.
SCORE: 30

Amber and Maks
Cha-Cha
“Bla Bla Bla Cha Cha Cha” by Petty Booka
Maks is annoyed that Amber hasn’t reached her potential. In fact, he’s so mad that he punches the mirror. Amber walks out because she doesn’t like dancing with angry people. The next morning, they both apologize and agree to dance in a spirit of positivity. Someone has been drinking Maureen’s Kool-Aid! Amber wears a red and black glittery body suit with tails. She flirts with the piano guy before winking at the JV dude playing bartender who drinks the entire time. Smart man. Amber actually smiles and appears to be enjoying herself. The steps seem basic which was reflected in their score.
SCORE: 28

James and Sharna
Rumba
“Need the Sun to Break” by James Bay
Sweet James has a hard time being sexy. That’s why he creates an alter-ego named Ricardo. It’s up to him to bring the sultry dance moves onto the floor. Sharna’s got the hip action and facial expressions down. James has the moves, but he never quite hits that sexy peak even though he grabs Sharna’s butt twice, hugs her boobs once and almost kisses her three times. Julianne claims he is the best male dancer the show has ever seen, yet she wants more. Isn’t a man wearing solid lace blouse enough for you Julianne?
SCORE: 38

Derek and Marilu
Cha-Cha
“Echa pa’lante” by Thaila
Derek wants Marilu to be in charge. This is her journey and if she wants simple steps, he’s going to give them to her because her legs are gorgeous. Who cares if she’s his mom’s age? Marilu has it going on. So does her carnation feather skirt made from a pink Muppet. Yes Marilu’s pins are gorgeous, but slowing down the cha-cha ended up being a bad thing in the judges’ minds.
SCORE: 34

Jana and Gleb
Argentine Tango
“Hands to Myself” by Selena Gomez
Jana pretends that she has a hard time being sexy. Then she proceeds to dance the sexiest dance this show has ever seen. Gleb choreographs a Madonna moment where Jana starts off in a bed with silk sheets. He lifts her crotch up onto his neck (truth) and spins her around a few hundred times. Both of their hair is slicked back. Both have telling facial expressions. Gleb grabs and flings and flies around his woman and they end up in a Flashdance style scene, except this time the shower water remains on full blast. The last moments of the dance drench our two lovebirds. Jana ends the routine upside down with water inevitably going up her nose. The entire ballroom explodes from the sexiness. This explains why Gleb publicly tells his wife that he loves her so much on Instagram last night…
SCORE: 40

Artem and Maureen
Samba
“Mas que Nada” by Sergio Mendes
Marueen, Marueen, Marueen. She got a little big for her britches, didn’t she? After a great score last week, Artem is quick to remind her that she still has trouble memorizing simple steps. Maureen claims she’s doing the best she can do. Positivity is the key! So are hot pink feathers. She licks her lips through a mediocre routine that still beats Ryan’s score.
SCORE: 31

Calvin and Lindsay
Argentine Tango
“Hotel California” by The Eagles
I really liked Lindsay’s routine. She knows that Gleb and Jana are also performing the Argentine tango and that they have amazing chemistry. So she decides to kill it with perfect choreography. Her greatest weapon is Calvin’s ability to fling her over his head and behind his back without breaking a sweat. Okay. That’s wrong. The dudes sweats all the live long day, but you know what I mean. Their moves were hard and sharp. Calvin owned his role as seducer. I liked it and thought they deserved to have a higher score.
SCORE: 37

Laurie and Val
Salsa
“Light It Up” by Major Lazer
Val only has a few pointers for his 16-year-old second generation Puerto Rican partner: make it clean, stick your butt out and arch your back. He claims that he and Laurie are at a disadvantage since they can’t technically get into the sexiness of Latin week because that would be so gross. Instead, he went for flirty and fun which was entirely appropriate. Sadly, the judges were all hot and bothered by Jana that they couldn’t be tempted to properly judge the hard steps Val choreographed.
SCORE: 37

Unfortunately two of my favorites (Jana and Calvin) were in the bottom three, but it was Amber who was sent home at the end of the night. Maks looked quite relieved to not have to punch any more mirrors in the near future. Amber seemed ready to go too. I think it was the right decision.

What did you think about last night’s show? Were Jana and Gleb as sexy as the judges thought? Is Laurie’s age a disadvantage? Does Julianne need to get off James’ back for once? Sound off in the comments!

Spot on, as usual, Lincee! I am shocked, however, that you made no mention of Ryan’s obvious “excitement” at the end of his dance! Those little yellow shorts could barely contain the “little Olympian” and Cheryl had to stand in front of him! I was behind the couch cushions (okay, I peeked a little bit!)

yes!!! that was so embarrassing! and awkward! and gross!

Did anyone else notice the cut to, who I assume is James’ girlfriend, when one of the judges mentioned how “beautiful” a couple he and Sharna are? She did not look pleased with that comment…

Yes! It reminded me of JT at the VMA’s when Madonna just kissed Britney, lol!

is it just me or does Artem hate Maureen? i mean, she’s getting on my nerves too, but i’m not being paid to be her dance partner.

I don’t feel any warm fuzzies between them that’s for sure.

I agree–definitely seems like there is not a lot of love lost between those two. She is pretty whiny and melodramatic on the show though. Maybe she is truly driving him nuts!

I would’ve liked to see Len’s score and comments on Jana and Gleb’s number!

I think Calvin and Lindsay deserved a higher score too. I have rewatched that dance a couple of times. It was amazing, and didn’t need props to be sexy.
And what is up with Julianne riding James every week? He is soooo good!

Calvin, my love. POINT YOUR TOES!!!

I am so ready for Maureen to go. She seems like someone who literally never laughs. Lighten up. Geez!

Yeah, I was kinda hoping she might get voted off this episode. It was fun seeing her on the show at first, but she is pretty whiny and weepy and all that drama is getting old! Guessing it will be next week…

I think it’s time for Pitbull to stop being a guest judge. He was just leering over Jana (“throw me your dress” – really??!!). He skeeves me out. It seemed that if it wasnt “sexy,” he didn’t like the dance. Too much ick factor for me! And it appeared he was possibly on something, as he seemed to have extreme difficulty producing his paddle for each contestant… Did anyone else notice that?

Hmm, he did have a really hard time grabbing the scoring paddle out each time–I definitely noticed that each time! It was weird. 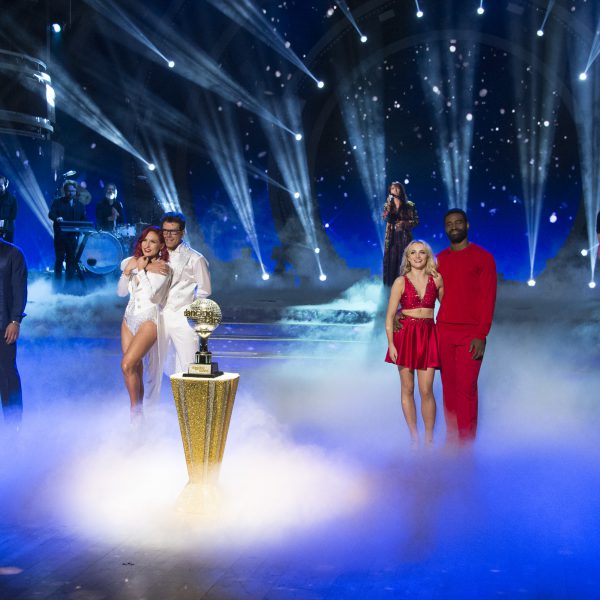 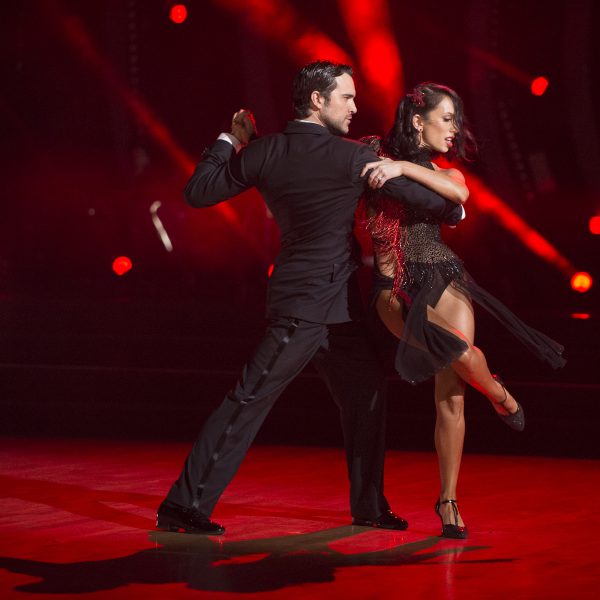 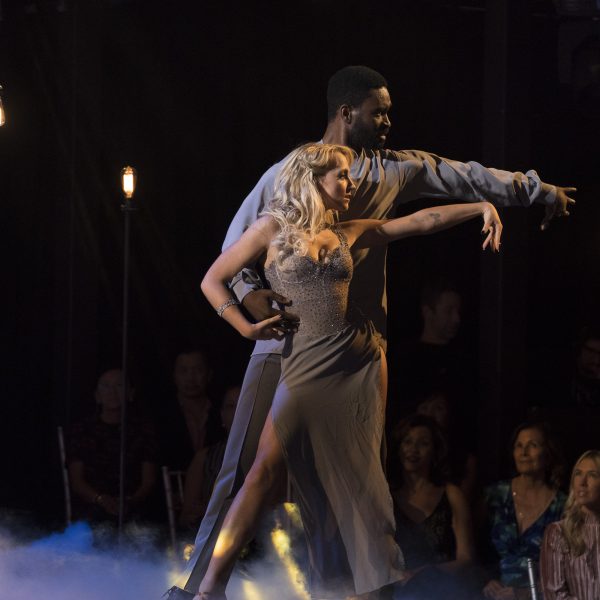