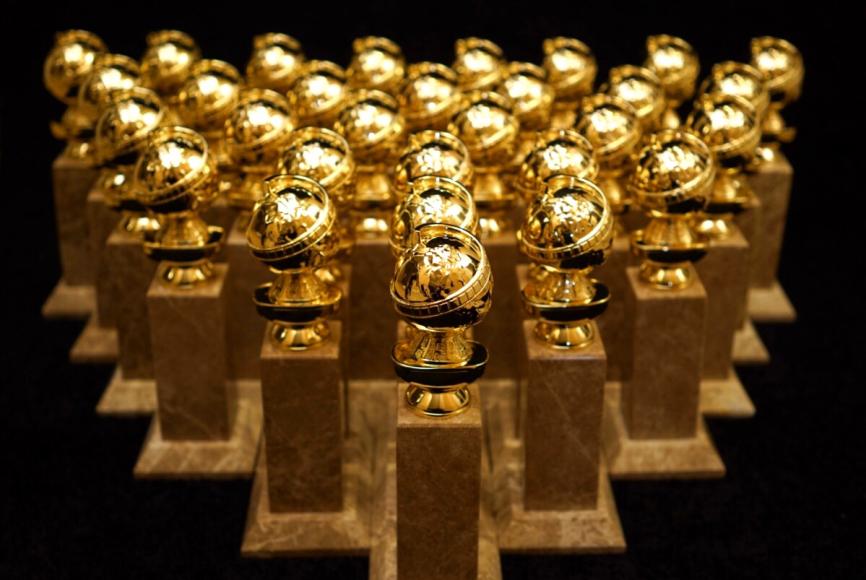 My Thoughts on the Golden Globe Awards

Every year I sit down to watch the Golden Globe awards and every year I’m baffled by the fact I don’t know the shows that are nominated in the TV categories, even though I practically watch TV for a living. I get a kick when I have to text my cooler friends to ask them why I’ve never heard of something called Mozart in the Jungle. I blame the fancy channels. I keep waiting for my Vampire Diaries guys or my other beloved CW dudes to be nominated (some abs should be honored), but I guess my fingers will be crossed another year.

I give myself a little more grace when it comes to the movie nominations. If it doesn’t have singing, dancing, animation, a super hero or a love story, I’m probably going to spend my money elsewhere. It’s the truth and we all know it.

I love how the Hollywood Foreign Press gathers a bunch of celebrities, forces them into a crowded ballroom, shoves enormous amounts of alcohol down their throats and records them as they hob-knob with fellow famous people. I actually saw Leonardo and Kate embrace as if they were on the Titanic (both won a Golden Globe!) I saw Han Solo and Rocky Balboa whispering secrets about my childhood in the shadows. The show is entirely too long, but I would totally watch an extra hour at the end just to see who geeks out over Table 10 and who has the chutzpah to take a selfie with Regina King.

And don’t even get me started on the fashion. I’m looking at you, J-Lo.

Here are some of my highlights from the ceremony:

Head in My Sweatshirt
No joke. My head was in my sweatshirt during Ricky Gervais’ entire monologue. I’m pretty sure my butt was clenched the entire time too, just in case. My favorite quote: “No one cares about the award more than you do. Keep it short.”

Bless Him
Channing Tatum’s hair was extremely special. I assume this particular style is for a role or he lost a bet. His entire bit with Jonah Hill was head-in-the-sweatshirt-worthy and I think he knew it. I don’t understand why Jonah was dressed as a bear. Did I miss something? Crazy Ex-Girlfriend
Rachel Bloom won Best TV Actress in a Comedy for Crazy Ex-Girlfriend. This show is on THE CW. I think she shouted her entire thank-you speech because the waves of shock were so loud that she couldn’t be heard otherwise.

I’ve Heard of George…
What is Mozart in the Jungle?

Poe Won An Award!
His real name is Oscar Isaac and his show is Show Me A Hero (which I’ve never heard of) but he will always be Poe to me. (FYI: He’s a Star Wars character.)

Hello Gorgeous
Melissa McCarthy looks soooooooo good. I loved her in Spy and I can’t wait for the female version of Ghostbusters to come out! PS: Someone mentioned that there is a female version of Ocean’s 11 coming out too! WHAT?! HOW DID I NOT KNOW THIS?

Bad Romance
Lady GaGa won an award for acting! And she wasn’t wearing meat! She had on a Tony Bennett-approved dress and carried a beautiful accessory — her finace Taylor Kinney. She thanked Ryan Murphy for 10 minutes, but forgot to thank sweet Taylor. I feel bad for both of them. I’d also like to point out that he’s a Vampire Diaries alum.

I Love the ‘80s
Christian Slater had never been nominated for a Golden Globe before tonight. He won, of course, because my crushes from the ‘80s crush things.

Straight Outta Awkward
Jamie Foxx announced that the winner for Original Score was Straight Outta Compton. That would have been great — if the film had been nominated. I kind of felt sorry for the real winner, Ennio Morricone, for The Hateful Eight. Quentin Tarantino didn’t seem to mind much, so I got over it.

And the Best Presentation Goes To:

Eva: Neither one of us are Rosario Dawson.
America: Nope. Well said Selma.
Eva: Thank you Charro.

Boys Club
Matt Damon named dropped Leo and Fassbender in his acceptance speech for best actor in a comedy. Question: Is The Martian a comedy?

BE STILL MY HEART

Yes Brad Pitt engaged in a little Botox and looked like he had been washed in the Lo-Fi Instagram filter, but I’m so glad the weirdo facial hair is gone. Bantering with my boy Gosling? PRICELESS!

ADRIAN!!!!
Sylvester Stallone won for Creed and EVERYONE IN THE AUDIENCE STOOD UP AND CHEERED! I have no clue what he said, but I do know he thanked his best friend at the end — Rocky Balboa. I love this guy.

Mr. Robot
Okay. This show scared me at first. I’m not sure why, but I wasn’t interested in it. But it won so many awards tonight that I thought I should ask. Is it worth my time? Should I watch it? If you tell me to, I will.

Life is Like a Box of Chocolates
Tom Hanks is ridiculously talented. He can do no wrong.

Where Are My Readers?
I love that Denzel Washington won the Cecil B. Demille Award and I love that Tom Hanks has officially deemed him worthy of being a one-name person. Washington obviously doesn’t work, so he will forever be known as Denzel. And he loves his wife even though she can’t read his speech either. Who forgets their glasses when they come on stage to receive a major award? Denzel does.

Captain America
Thank you, Lord, for the wonder that is Chris Evans C is For Cookie
Taraji P. Henson looked so pretty in her white dress. She also handed out cookies to everyone in the audience as she made her way up to accept the award for Best Actress in a Comedy. It did not surprise me one bit.

Beard Detective
I figured out where Jim Carey has been the last couple of years. Growing his beard.

Copenhagen
I would bet you $20 that Leonardo DiCaprio had a dip of chewing tobacco in his lip when he accepted his award for Best Actor in a Movie Drama. Being in the oil industry as long as I have been, it was TOTALLY obvious to me. Some of you are wondering how that is possible without an empty Dr Pepper bottle with which to spit? Prepare yourselves — some people swallow their chew. I’m not joking. I just threw up a little in my mouth. And I know it probably tasted better that what Leo gulped down several times during his speech.

The Revenant
Best movie, best director, best actor. I guess we all need to go see this now?

What did you think of the Golden Globe awards? Were you as lost as me during the TV nominations? Have you seen any of the movies nominated for Best Picture? Do you think Ryan Gosling’s white tuxedo was as handsome as I did? Sound off in the comments section!

mr. robot IS scary. but not in a greusome way. it’s very good TV. well written.

Mr Robot is awful. The first few episodes were great, but then the entire plot became the same as a movie will all have already seen. Completely unoriginal.

Jonah Hill was dressed up as a bear because of a scene in The Revenant where Leo’s character gets mauled by a bear. Knowing that, i actually thought it was pretty funny (in a goofy, stupid way)! 🙂

Mr. Robot started out really good. But after 3 episodes I lost interest. So did my all my TV buddies.

lololol! Love this! Was it just me or did a lot of the women stars have their ‘globes’ hanging out? lol

Ricky is a polarizing kind of guy, I find him funny even though he gets pretty caustic at times. My favorite line was “No one cares about this award as much as you do. Keep it short”. Lady Gaga looked beautiful, she knows how to glam it up. Throughout her acceptance speech I kept yelling at the TV “Don’t forget Taylor”, guess she couldn’t hear me. I’m sure she felt horrible later and he forgave her. Ryan Gosling and Brad Pitt, there is a God! What was up with Channing Tatum’s hair? Does he own a mirror? Yikes! What is… Read more »

I rewound my DVR to see Sly win again! It was my fave moment of the night – when that music swelled (and it DID swell!!) and everyone stood up – it made my heart well………..swell…..! I thought Jane Fonda and Lily Tomlin looked like they were “told” to go by their publicists and Jane was better at keeping a stiff upper lip about it. I loved J-Lo’s hair – not so keen on the gold of the dress – but the shape of the dress was awesome and fit her perfectly!! And Mozart in the Jungle is quite entertaining!… Read more »

I am halfway through Mr. Robot right now, and it is a bit dark and has an overall depressing feel to it, but I DO think it’s worth watching. I think you will like it. And I hope you do a review of it for us! 🙂

Mr. ROBOT deserved both the Golden Globes it won. Even if you can stomach the deeply terrifying world it portrays, the first season leaves you dazed and utterly confused in the conclusion. It is the antithesis of Descartes “I think, therefore, I am.” It is a psychological thriller of the first magnitude, utterly frightening, deeply confounding, and brilliantly conceived. Try it, Lincee, but it maybe an acquired taste.

NattyfromOz, is Mozart in the Jungle on Netflix? Sounds interesting.

It is on Amazon Prime. And it’s good.

From what I understand, Rachel Bloom accepted her award in character. 🙂 Hence the craziness!

I watched Mr. Robot for 3 weeks. But it is very dark — and I realized that after I watched it that I could “feel” its darkness long after the show was over. I would not recommend this show.

I found it interesting that none of the TV shows that were nominated were on network TV except the CW show.

I was wondering if Leo was dipping tobacco. Too bad. Very impressed by his speech, however….by what he said and how well he delivered it. It would be great to see him finally win an Oscar. I enjoy the movies he chooses to work in.

I LOVED that Sylvester Stallone won. I saw him interviewed on Ellen after he received the nomination. Seems like a humble, grateful man. Plenty of self-effacing humor. Likable for sure.