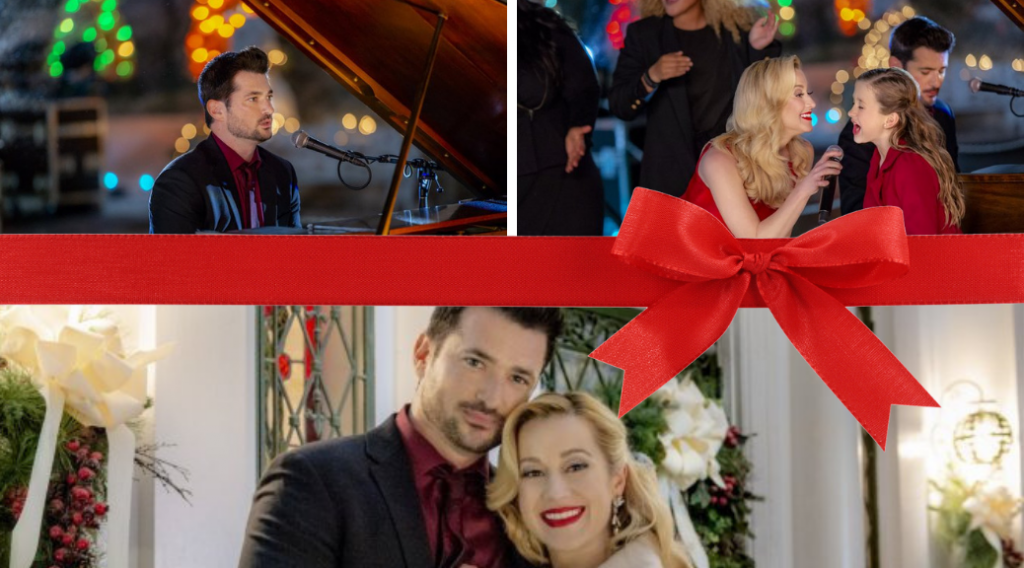 I’m going to shoot you straight with this one, dear friends. I would rank Christmas at Graceland below that other Christmas we had in a mansion (Pemberley Manor) if this script didn’t have two important important characters:

I find Kellie Pickler adorable. However, I also find that her acting skills do not match her vocal capabilities. I understand Hallmark’s need to find a country artist to convincingly portray a woman who used to live in Memphis, currently a banker in Chicago, but it appears they utilized Lee Ann Rimes in other ways.

Kellie plays Laurel, an executive who works for Chicago Financial Corporation, which is equivalent to “Acme Building” in the Looney Tunes cartoons. Her boss wants her to secure one of the oldest banks in Memphis and she has absolutely no problem returning to her hometown to work during the entire holiday season.

There are no parents to return to, so Laurel and her daughter Emma stay in a tricked out hotel that lets you schlep your very own Christmas tree inside to decorate your individual room/suite with some yuletide cheer. But before Laurel gets down to business, she motors over to her old college roommate Sally’s house to remember days of yore when Laurel used to be one part of a sensational duo with a guy named Clay. Laurel hears that Clay is still in town, which is proof that she’s been stalking him on Facebook.

There’s no time to reminisce anymore. Laurel has to get down to the bank to work her magic. She leaves Emma in the capable hands of Sally, who has pinned every cool Christmas craft on her Pinterest board. We’re talking cookies, gingerbread houses, snow globes, pinecone decorating, and something to do with birdseed ornaments that you hang outside. Emma is in heaven.

Emma is also in a hot pink coat, which I thought was strictly forbidden on the Hallmark Channel between the months of August and January. Thankfully, Laurel makes it all better in her fabulous red coat with matching lipstick.

Later that night, Laurel takes her daughter to Graceland. It was her favorite place growing up and she wants Emma to love it as much as she did. As Laurel backs up to take the perfect picture of her daughter in her hot pink coat (shivers down my spine), she bumps into Clay. He is now a music promoter with the most gorgeous eyes and jawline you’ve ever seen.

What I’m saying is that he should be in the “Hunks of Hallmark” 2019 wall calendar.

Clay is in charge of a Christmas concert that will be held right there in front of Graceland and he wants Laurel to come! He also arranges for them to have their own special tour of Graceland the next morning. She rolls her eyes, and laughs off the fact that this gorgeous man is straight up flirting with her in front of Elvis’ house. WHAT IS WRONG WITH YOU, WOMAN?

That night, Clay sends Laurel a guitar to her hotel room and Laurel serenades Emma with the most country-fied version of “Joy to the World” you’ve ever heard. Thens she sends Emma to bed and I notice that they must have packed more than just their stockings for their road trip. I’m thinking it was an entire steam trunk of Christmas decorations for the hotel room since Emma’s headboard is covered in twinkly lights.

The next morning we find Clay in crisis mode. Oh no! One of his acts canceled and he must figure out how to save the day! Maybe if he took his shirt off he could think better. He stops long enough to take Laurel to Graceland that night and they break all the rules by crossing over the velvet ropes to sing “Silent Night” on Elvis’ piano.

So there’s Clay. Sitting at a piano. Singing and playing with Laurel. And she still doesn’t bat a single eyelash at him.

Laurel heads to the bank guy’s house for a Christmas party the next day to try and woo him to sign the papers. Instead, she finds herself playing a rambunctious game of pin the nose on the reindeer and pretending to be totally charmed by a reindeer wallet she received in a chill version of a White Elephant gift exchange. The old guy thinks Laurel is so sweet, but doesn’t sign the papers because Acme Financial Group wants to lay off people. Laurel promises to figure out a way where that doesn’t happen.

Later, we find Laurel, Emma, and Clay sitting around a camp fire eating s’mores. Clay plays the freaking guitar and this is when I decide he probably drives a truck and should be my soulmate. After they sing “Silent Night” again, Laurel agrees to fill in for Clay’s missing musical act because she misses crooning with this handsome man.

We know she’s smitten because a snowball fight ensues. Plus, they go caroling (ALL THE HIVES) and wrap up the day with a zip around the ice skating rink. Just as Clay leans in for the big kiss, Emma interrupts with some nonsense about a selfie. COME ON.

Our big twist comes in the form of Laurel having to leave town because her boss thinks she can’t handle landing the deal with Acme Bank Man. He wants her back in Chicago before the concert and everyone cries about it.

But something makes her change her mind. I neither care nor remember why, and she heads over to Graceland to sing, you guessed it, “Silent Night” with Clay. They bring the house down when a gospel choir joins them on stage. Clay is smitten.

Acme Bank Man finds her and wants Laurel to know that family comes first. He’s sorry the deal didn’t work out, but would she be willing to run the bank? Of course she is! And it’s ever so convenient that there’s a darling little cottage right across the street from Sally. Laurel is moving back to Memphis!

Clay couldn’t be happier. So he kisses her and it is awful. I blame Kellie Pickler on this one. But because he’s Clay and Clay is suave, he leans in for a second smooch and it’s better. Then he goes in for a THIRD and all of the Hallmark executives’ heads explode. The triple kiss definitely helped overshadow other odd things going on in this scene.

I was waiting all weekend for this review and you nailed it. Kellie has definitely toned down the corn pone from American Idol days. She is a beautiful young woman and her acting wasn’t awful, but wouldn’t a true Memphisonian (?) know it is pronounced Grace LAND? And really–Silent Night multiple times? There are hundreds of Christmas Carols . . .

Kevin gives it only one paw up.

Not the best Hallmark Christmas show. Kellie not the best actress but was her first that accent compared to the rest of the cast was a BIT much! Not one I Wil watch multiple times this season ircany season

It wasn’t a horrible movie, but the fact that watching Kellie sing and her mouth not matching the music drove me batty. Her acting was a bit wooden, and the director did a horrible job ensuring that she was doing something that made sense throughout the movie. For instance after Clay had hung up Laurel is still holding the phone to her head nodding like she is listening to someone. Also they talked about the girl getting cookies multiple times but she never seems to get a single cookie. That said the girl was pretty good and I think Kellie… Read more »

I loved the movie and all the actors and actresses, I love Kellie, I love her makeup, she and Clay are a great match on screen . I recorded it and told all my friends about this movie and they all agree with me. This movie stole my heart, I laughed and cried. Best movie I’ve seen on Hallmark.

The acting of Kellie needs work; although she looked beautiful at all times during the movie, her acting skills were sub-par. Singing was Kellie.

Terrible acting. Story so -so. Cinmentography decent Actors need to stick with music and drop acting. A money making cheesy movie. I had to turn off movie as was horrible.

You said exactly what I thought. Just watched it. If I ever encounter a Clay giving me a private tour of Graceland, being handsome, funny, gorgeous, good singer and sweeter than chocolate dipped in chocolate DAMN GIRL IMMA MARRY HIM ON THE SPOT! Whatswrongwitchu? She is beautiful but she should stick to singing. Her acting skills were… bad. Veryyyyy bad. And yeah, a sleeveless dress in 30 degree weather? Sure. I’ll let it slide. This movie was saved by Clay. I mean, it could have been a movie about Clay building a shed in a backyard it would have been… Read more »

I totally agree with you!

Your review was spot on and so very funny. A friend of mine decorated Sally’s house for the movie. So in my eyes, that stole the show. It was an ok movie. I’m not a Kellie Pickler fan, but she has toned down a lot from her AI days.

It was nice to see Graceland decorated for Christmas even though it was filmed in July. If course, Clay was great and gorgeous but should have been paired up with a real actress in such a lovely setting. Kelly certainly needs to stick to singing as she is definitely NOT an actress! Hate to say it, but did not watch but one time due to Kelly’s horrible acting…sorry, Kelly. Hallmark, you generally have great casting for your movies, but please avoid using people with no acting skills. Thumbs down!