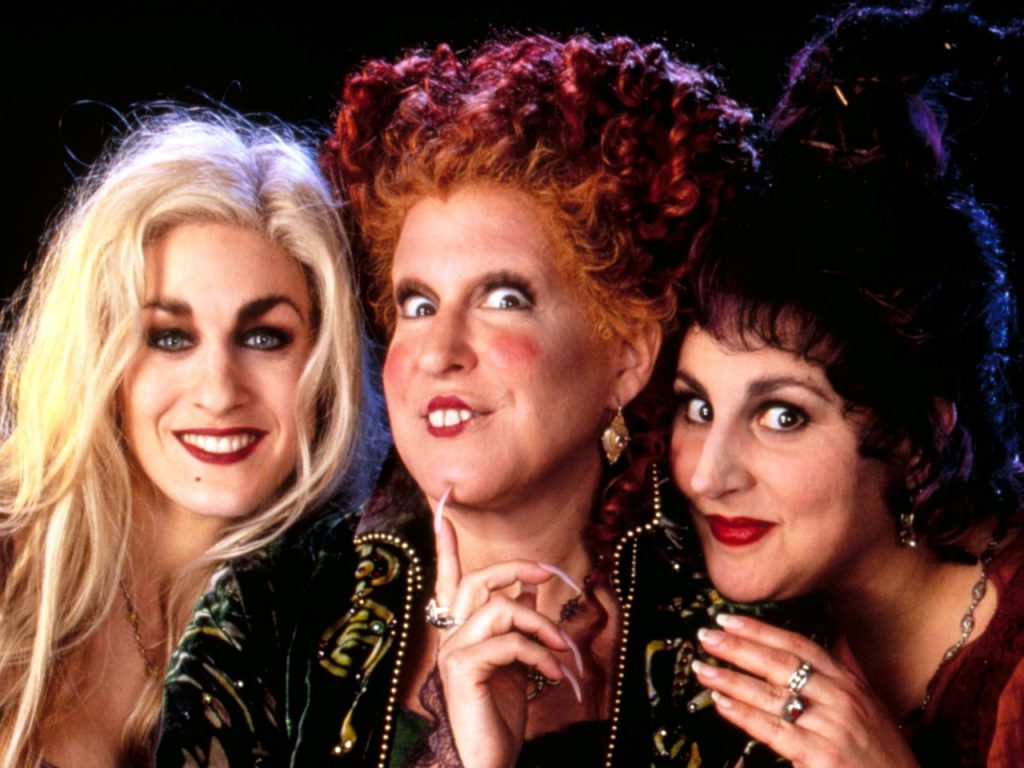 I’m going to assume everyone reading this sentence has seen the movie Hocus Pocus. Or you’ve at least heard of Hocus Pocus. If you haven’t, here’s a handy little Wikipedia entry that details this lackluster Disney film which experienced a major renaissance in the 2000s thanks to a little channel called ABC Family airing the film six times a day in the weeks leading up to Halloween. Over night, Hocus Pocus went from Disney dud to cult classic.

The film debuted in the summer of 1993, which makes little sense considering its subject matter. I find it odd that I didn’t go to the theater to partake in person because high school Lincee was obsessed with Bette Midler in a way that leaps over the boundaries of embarrassing. Who rocked out to the Beaches soundtrack every day driving to school? THIS GIRL!

Bette was the Alpha sister in a trio of witches. Sarah Jessica Parker was the ditzy sister and Kathy Najimy was the doting sister.

That’s right. My beloved SJP of Footloose and Girls Just Want To Have Fun fame and my favorite part of Sister Act (hello Najimy) were the sidekicks to Bette’s glorious lead role. This is a trifecta for what I consider to be a perfect recipe for purchasing opening night tickets.

Alas. I did not go. In fact, I don’t even remember hearing about the movie. It all makes sense, knowing now that Hocus Pocus didn’t slay the box office with Bette, Sara J. P. and Najimy’s abundant talent. And I was not cool enough to have the fancy Disney channel. There’s no way I could have seen it in college or in my early 20s.

I guess that’s why I became ridiculously excited when I stumbled upon it decades later as an adult who chooses to pay way too much for cable. I heard whispers of this darling little show, so when I saw in on my channel guide, I squealed, settled in with some popcorn, a cold Dr Pepper, Halloween-themed Oreos, and prepared myself to behold the wonder that is Hocus Pocus.

Here’s the deal: Hocus Pocus creeps me out.

For years, people would tell me that Bette Midler’s version of “I Put a Spell On You” was a highlight of the movie. I had no idea what they were talking about because I shut the TV off after watching poor Thackery Binx being turned into a cat for heroically trying to save his little sister from having the essence sucked out of her body by three witches.

Do you know what else is unsettling? The haunting song Sarah Jessica Parker sings to lure Emily into the cottage. When I told my friend Stephanie I needed to figure out when Disney was going to air Hocus Pocus because I was going to try and watch it again ten years later, she skipped into the other room to recover her personal DVD copy singing that eerie song the entire way.

That afternoon in the comfort of daylight, I sat back down to give this cherished classic another go. Like a normal person, I fast forwarded past all the scary beginning. I stopped at the part where Max lights the virgin candle and the Sanderson sisters come back.

Sarah Jessica Parker is hilarious, except when she sings that horrible song on her broom again. Watch her reactions. Her comedic timing is incredible. (See: “Amok, amok, amok,” being pushed into the “black river,” and any time she talks about a boy.)

Najimy’s bottom lip quirk was pretty impressive too, not to mention the fact that she rode a vacuum cleaner to the graveyard, which was pretty funny until I was distracted by the dude with the sewed up mouth. No thank you.

I will say the chemistry between the Sanderson sisters is legit. The way they walk in sync and compliment each other in a scene is remarkable. Yes, “I Put a Spell On You” is definitely a showstopper, and I did laugh a lot, but I must report that the squishiness outweighed the fun factor.

I agree with all of this. I saw it in the movie theater near Halloween time ($1 discount theater), and was really creeped out. I think all three actresses are incredible, yet the overall affect is just odd. It’s just not classic Disney fun. However, I was in the minority in my house, as my mom and sister absolutely loved it (and still do to this day). *Sigh*

Full disclosure: I owned a copy of Hocus Pocus, because high school Julie was ALSO obsessed with Bette Midler in a way that leaps over the boundaries of embarrassing. And yes, THIS girl also rocked out to the Beaches soundtrack on the regular (and the For the Boys soundtrack… did you have that one, too??). I’ve also seen her in concert five times, and have tickets to see her in Hello Dolly on Broadway next month (squee!). At any rate, I’m pretty sure that 14-year old me loved Hocus Pocus, but I loved pretty much anything Bette did back in those days. As an adult, I have to agree – it’s pretty creepy 🙂

I didn’t like it either! Glad I’m not alone. Lol

Oh my goodness no. I started watching one time because people had talked about it and it was on all the time. I didn’t make it 20 min. Horrible.

It creeped me out when I was little but now as a full fledged adult I love it!!!! Billy the Zombie does kinda make my stomach turn but it’s just creepy enough to make me feel like “ooooh it’s Halloween!” Seriously, Hocus Pocus is as scary of a movie I can watch. But I LOVE IT!

This movie has always freaked me out. I thought maybe it was just because I had seen it a few times as a kid, but as an adult it still makes me uncomfortable. The best part of this movie is that the kid’s name is Thackery.