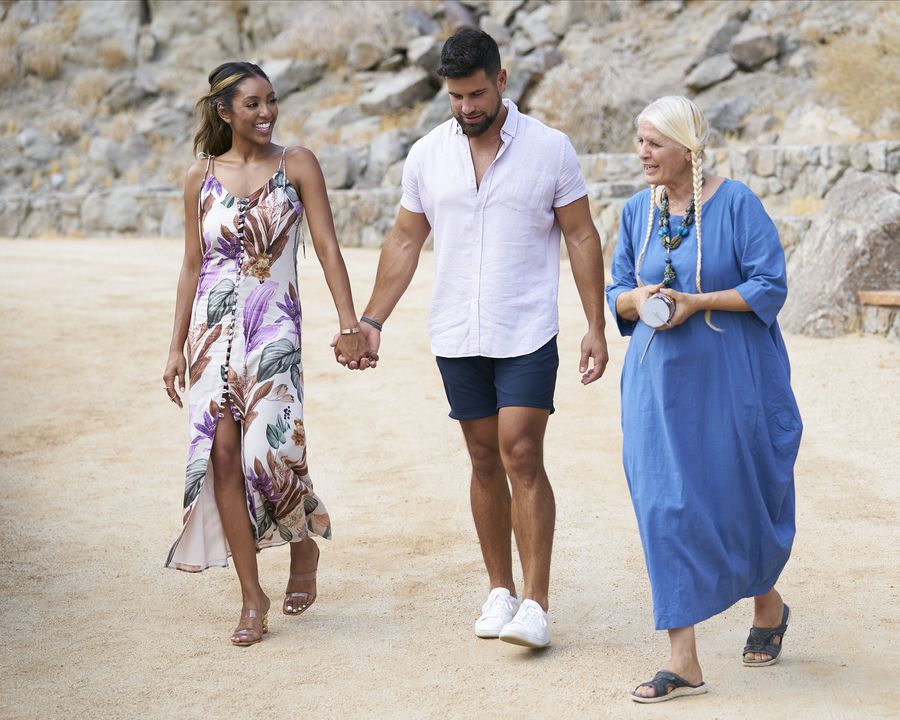 Tayshia is anxious. She, too, has accepted the reality that you can fall in love with more than one person in the span of sixteen days. Her mind is reeling. There are decisions to be made. She can’t think straight. Fortunately, she has the wherewithal to get dressed in a coral lace tunic she’s substituting as a dress and pretend to read a book until help arrives.

Praise be Our Host Chris Harrison is BACK!

Let me tell you, Harrison is looking fine in a navy blue Western-themed shirt that would have been Hundo P had it featured pearl snaps. He sits patiently as Tayshia “fills him in” on the details of the last forty-eight hours.

One of the biggest details is Bennett’s sketch return, lurking in the pink bougainvilleas by her El Presidente suite door. Hare feigns shock, knowing the producers swept Bennett away to the south forty the minute Tayshia dismissed him the night before. But that doesn’t stop Our Host from giving solid advice on why Tay should keep the Harvard D-Bag around.

Tayshia: “I don’t know what to do. Should I give Bennett another chance?”

Hare: “Someday somebody’s gonna make you wanna turn around and say good-bye. Until then, Tayshia, are you going to let them hold you down and make you cry?”

Tayshia: “Well, I cried for, like, a second, but it did feel weird sending him home that night. What should I do?”

Hare: “Don’t you know? Things can change. Things will go your way. If you hold on, for one more day.”

Tayshia: “So you’re telling me I should keep him around for another rose ceremony?”

Tayshia gives Harrison a knowing wink and hugs him tight, absorbing all of the pheromones. Our Host smells like pine wood shavings, bourbon eggnog, and joyful triumphancy.

Raise your hand if you thought for one millisecond that Blake had a chance of landing a date rose from Tayshia? Even Guru Gita appears bored as she dangles her crystals around Tayshia’s boobs and Blake’s — dangling participle — to cleanse their aura.

Another big shout out goes to the ABC graphics team for a well-placed Black Modesty Box. Keep up the good work.

Guru Gita instructs the couple to intertwine their bodies and stare deeply into each other’s eyes. Tayshia lasts less than ten seconds before she breaks contact. Sadly, Blake does not pick up on this major red flag and celebrates how he and Tay are back in sync.

You may be in sync, Blake, but Tayshia is definitely Backstreet Boys. She does NOT want it that way.

For anyone who has studied the Enneagram, we think Tayshia is a 9. She’s a peacemaker. She doesn’t like conflict, and she doesn’t like hurting feelings. That’s why it took her twenty minutes to send Blake packing, under the illusion that it was a time issue that kept him from scoring a Home Town Zoom rose. She steps into dangerous territory when she claims he has all the qualities of a guy she wants, but she’s just not there yet.

Blake doesn’t speak. I think he’s both devastated and dehydrated from all the sweating. After laying in his boxer briefs on the hot desert sand, followed by a half-hour-long debriefing with Tayshia, he’s looking a little pasty. Someone fetch that guy the Canadian version of Gatorade!

Tayshia deposits Blake into the back of the rejection SUV and experiences her first legitimate meltdown of the season. Had there been a balcony, she would have pulled a Mesnick. Instead, she folds onto herself, clutching her head, beautifully executing what old school IHGB readers may remember as the “Crouching Tiger Hidden Mesnick,” first performed by the one and only Jake Pavelka.

Was Tayshia upset by sending Blake home? Yes, but we must consider her emotions from a different lens. She’s overwhelmed because she “feels bad” and “doesn’t want to hurt anyone.” She can’t imagine what it will be like to ditch the ones she truly has feelings for back in the cabanas.

In fact, with this much momentum backing her sensibilities, she’s going to knock one more out while she’s on a roll.

Tayshia stumbles into the cabana, clearly distraught. Through several hiccups, she delivers the news that Blake is gone, and she requests a private audience with Riley.

Bless his heart, he knows exactly what’s going on and steels himself for the demolition of his heart. Again, Tayshia takes way too long to get to the point. She finally admits that she’s “not there” with Riley, and she doesn’t want to put him in a position of having to introduce her to his family. She backs this punch to the throat with, “I feel comforted and safe with you.”

Riley has one of the more realistic reactions to this news. “The longer I sit here, the longer I look at you, the longer I hear you talk and smile, the more pain I feel. I’m going to go now.”

Tayshia walks him to the rejection SUV, hugs him good-bye, and loses her mind in the middle of the driveway. She cries, “I’M SORRY” and mumbles, “I didn’t want to hurt anyone.”

This does not bode well for the next several dates.

I half expected Tayshia to ditch Noah and Bennett in the next scene. Is ABC rushing her along? Could Matt James be descending on the La Quinta Inn and Resort? I’m sure they don’t want any overlap because if Tayshia saw him walk in, she definitely would insert herself into his season, pull a Clare, and claim him as her future husband.

Nevertheless, the five remaining guys crowd around the coffee table, lamenting on how it will be so hard to go home at this point. Then Bennett walks in, extra Chachy in a purple plaid suit. He smiles, scoffing at the other men. Naturally they can’t say anything at all about this turn of events, lest they question Tayshia’s integrity. So they seethe in silence.

Harrison comes around the corner, dropping the news that there will not be a cocktail party. Tayshia knows what she wants to do, and she wants to do it in a repurposed pink silk kimono that accentuates her cleavage. To no one’s surprise, she sends Noah and Bennett home in separate rejection SUVs.

We predicted the remaining four weeks ago: Ben, Brendan, Ivan, and Zac. None of these men join Harrison at the Men Tell All. In fact, about half the cast joins Our Host for

Did they tell all? They didn’t tell us anything we didn’t already know.

Was it a waste of time? Yes. The struggle bus is real.

Is there a signature color for the season? You bet. Purple, the color of royalty, is how you dress for success in 2020.

Are we over the Noah and Bennett drama? AFFIRMATIVE.

Did Noah call High Hair Kenny “One Direction Party Boy in Cammo?” He did. And I laughed. Hard.

Is Yosef still a jackwagon? Who does he regret how he treated Clare? He is, and he does not.

Does Riley still have feelings for Tayshia? My guess is yes.

Were the bloopers worth watching? Not really, but here’s a link so you can see for yourself.

Did you figure out who will go home next week based on these scenes? I HAVE THOUGHTS! Let me hear yours in the comment section!

“She does NOT want it that way”
Bwahahaha!!!

The Canadian version of Gatorade is “Gator-eh!” btw.

Hilarious!!! I loved this: Tayshia: “I don’t know what to do. Should I give Bennett another chance?” Hare: “Someday somebody’s gonna make you wanna turn around and say good-bye. Until then, Tayshia, are you going to let them hold you down and make you cry?” Tayshia: “Well, I cried for, like, a second, but it did feel weird sending him home that night. What should I do?” Hare: “Don’t you know? Things can change. Things will go your way. If you hold on, for one more day.” Tayshia: “So you’re telling me I should keep him around for another rose… Read more »

Noah calling out Kenny was *chef’s kiss*. I think Noah exited exactly when he wanted to. Not that I don’t think he had feelings for Tayshia, I’m sure he did a bit, but let’s be real that boy has more to do before he settles down. My prediction is next time we see him the mustache will be back in full force, he’ll have grown his hair out, driving his live-in van onto the beach in Paradise. Totally a Dean 2.0, am I right or am I right?

I listened to Noah on Rachel & Becca’s podcast and he’s actually more mature than they made him out to be. He’s a travel nurse and has been on the front lines with Covid. So, I think he has a real life aside from the show! Can I see him in Paradise? Absolutely!! 🙂

Men Tell All: Did they have to quarantine for this? 8 guys showed. The rest apparently had their fill of having a Q-tip tickle their brain.

Who else thought the Guru lady reminded them of Rob Schneider’s wife in Grown Ups? 🙂 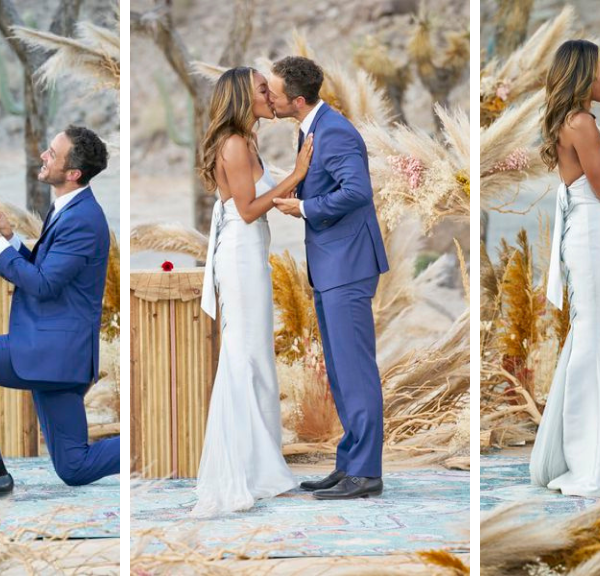 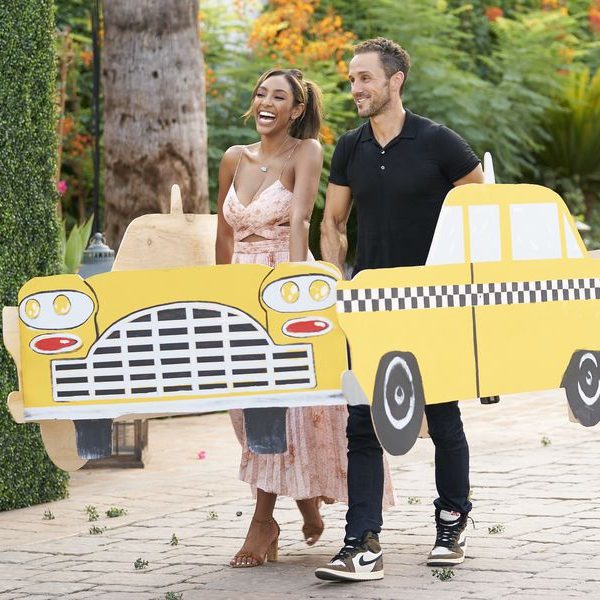 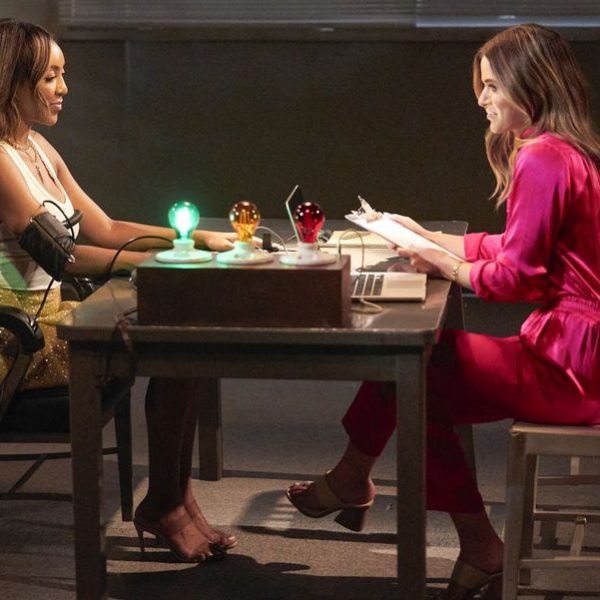 Bachelorette Tayshia Recap: Once a Cheater